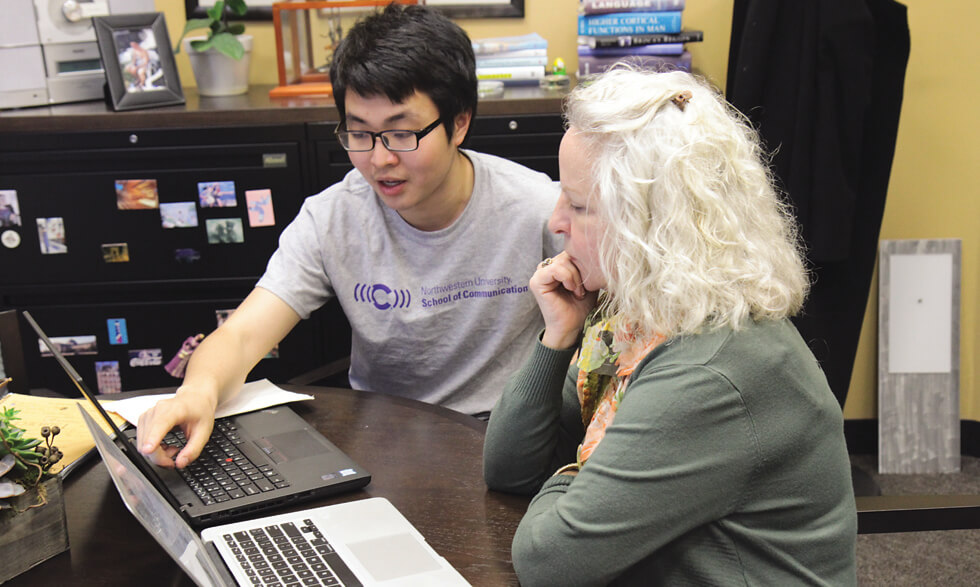 Cynthia K. Thompson, Ph.D., is a top researcher on language recovery from brain damage. Her research is funded in part by the National Institute on Deafness and Other Communication Disorders (NIDCD). NIH MedlinePlus magazine caught up with the Ralph and Jean Sundin Professor of Communication Sciences at Northwestern University's School of Communication, where she leads the Center for the Neurobiology of Language Recovery.

What led you to your current research?

The first patient with aphasia I saw was a very well-educated, World War II veteran, and former attorney, who clearly had difficulty expressing himself. He appeared to understand most of what was said to him, but his sentences were ungrammatical. On testing, he was able to he was able to name nouns (pictured objects), but not verbs (pictured actions). This was shocking, yet intriguing, and it has guided much of my research ever since.

My work is focused on understanding the brain and language (primarily verb and sentence) processing.

What do people need to know about aphasia?

Aphasia is a language disorder that affects the ability to understand and produce language. It's a common result of stroke and other problems that affect the brain.

Treatment improves communication ability, resulting in gains in language processing as well as changes in the neural networks for language.

"Research shows that people with aphasia can continue to recover up to 10 years post stroke and beyond."

What have been some recent findings developed through research?

My team has made several important discoveries. Think about learning and how our brains are wired. We learn simple things first, and then build on them as language develops. In people with aphasia, damage has occurred to an already built language system; therefore, stimulating access to more complex forms results in access to simpler, related forms.

We used to think that once a brain heals from the stroke itself (swelling of the brain subsides, etc.) recovery is no longer possible or is limited. Research shows that people with aphasia can continue to recover up to 10 years post stroke and beyond. We have learned that factors, such as cerebral blood flow, are affected even in parts of the brain not directly damaged by stroke. Other parts of the brain may be recruited to support language recovery. We know we can change the brain, we know people learn, but we want to understand which patients have the potential to recover most.

What sorts of therapies are available and proven to be effective?

The most effective treatments target specific language problems, such as naming and word retrieval, spelling, and sentence processing. There is a "use it or lose it" truth when it comes to recovery.

Thus, intensive language treatment focused on impaired processes is important. But, the schedule of treatment is also important. In chronic stages of recovery, treatment spread out over a longer period may be better than a great deal of treatment provided within a shorter time period in terms of learning and recovery of some aspects of language, like spelling and sentence processing, in aphasia.

One of our next projects will attempt to "boost" recovery. Based on what we have learned about regions of the brain that are recruited to help in recovering language, we plan to apply magnetic stimulation to activate those regions.

Finally, we know being involved in communication-based activities also improves outcomes. We recently opened the Northwestern Center for Aphasia, focused on communication and community for people with the condition.