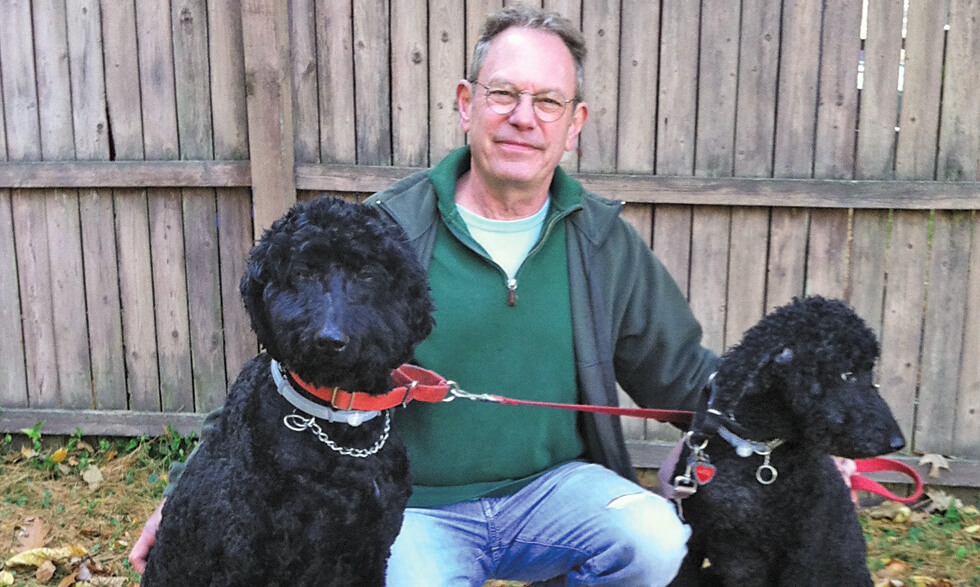 Pictured with his dogs, Lucy and Henry, Mark Vail has rekindled his former talent as a master potter.

One unremarkable September morning in 2011, Mark Vail had trouble getting dressed.

Then, he poured milk across the kitchen counter instead of into his cereal bowl. Thinking he was just overly tired from conducting a long, tedious auction the day before, he decided to lie down on the sofa.

When he responded to a question in nonsensical language, his wife, Jane Galyean, realized something was wrong and called 911. Vail, a healthy 58-year-old, had suffered a stroke during the night that left him with aphasia, an inability to communicate caused by damage to specific brain areas.

"I felt foggy, like I was in a bubble," Mark says. "I'd lost my peripheral vision and remember thinking that maybe I'd died and was just observing the chaos in the emergency room around me."

The effects of Vail's aphasia were immediate and devastating for Vail and Galyean. "Overnight, Mark's work as an auctioneer ended," says Galyean. "It was devastating for both of us as our lives changed so dramatically. Suddenly, Mark's career ended and the demands of his aphasia became all consuming.

Luckily, Vail and Galyean had recently moved to John's Island, S.C., near the Medical University of South Carolina one of the few hospitals in the country with a language and aphasia clinic and a dedicated aphasia research program.

"This is an important service that's not available in many regions," explains Leonardo Bonilha, M.D., Ph.D., associate professor of neurology and clinic director. "It allows patients with chronic language problems to receive appropriate follow-up therapy and access to clinical trials."

When Galyean called to find a stroke support group, she was directed to the clinic where a phase II trial of Transcranial Direct Current Stimulation to Treat Aphasia was under way, funded by the National Institute on Deafness and Other Communication Disorders (NIDCD). "This study evaluates whether speech therapy coupled with brain stimulation through the scalp improves recovery for patients with chronic aphasia like Mark," Bonilha says.

"The MRI technician was great at helping me relax and it was really good to have so much daily stimulation. I enjoyed challenging myself to get the answers right to the language tests they gave me. Everything helped."

Bonilha agrees that patients benefit even if they receive placebo. "First, they're helping others. I can't stress enough what a huge service participants do for everyone else with similar conditions. Plus, they get extensive speech therapy that is not available to many stroke survivors. And, people in trials also benefit from the social interaction.

They become part of our group and we try to create an enjoyable, welcoming, and supportive environment." Now, five years post-stroke, Vail would say to others in a similar situation, "Even though it may be uncomfortable, try to get into as many programs, studies, and support groups as you can to help re-fire your brain. It made me feel less isolated and more self-confident.