Tonja Johnson created a support group to help others with the common, but difficult, skin condition 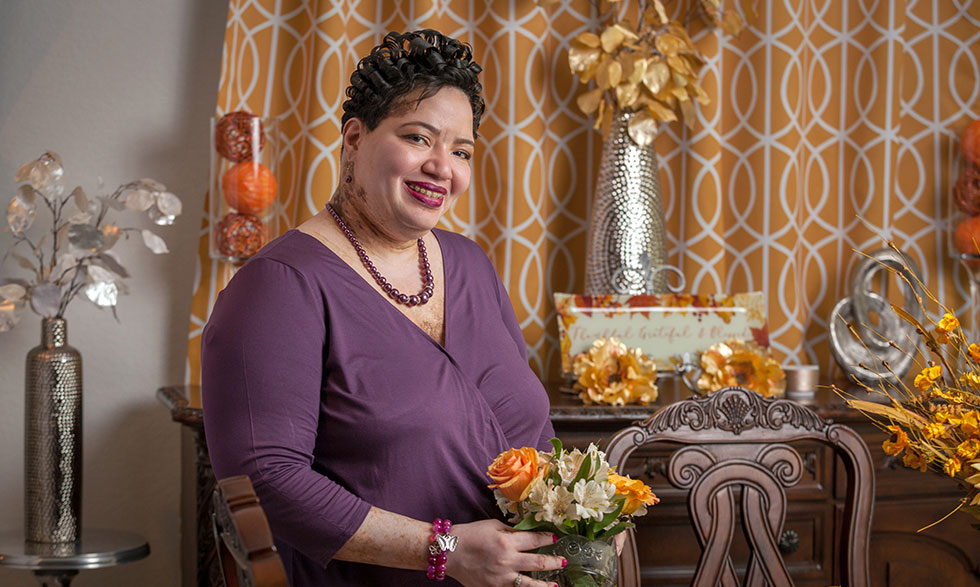 Tonja Johnson was diagnosed with vitiligo at age 43 and has lost about 80% of her color.

Tonja Johnson was 41 years old when she noticed a small, white spot on her leg. It wasn't long before she started seeing more spots on both her legs and arms.

As the spots grew in size and number, Tonja decided to see a dermatologist, a health care provider who focuses on skin and hair conditions.

Two years later, at age 43, Tonja was diagnosed with vitiligo. The condition causes some or all of the skin to lose color, leaving white patches.

She tried to cover up her light patches with long-sleeved shirts, but soon her hands started losing pigmentation.

As a dark-skinned African American woman, Tonja says she was teased as a kid for having such dark skin. Then, as an adult, to start losing that very color she had worked so hard to love sent her into a deep depression.

"My vitiligo is aggressive," Tonja says. "I've lost about 80 percent of my skin color in a very short amount of time."

Her doctor prescribed topical creams to help bring back the color,  but Tonja found it hard to keep that up. She lives in Florida where it's hot and humid, so she had to reapply the creams often.

She considered phototherapy (light therapy) too but it was expensive, costing her several hundred dollars a month. That's when things changed for Tonja.

"The very thing that brought so much pain to my life also has brought passion. I no longer feel sorry for myself."

"About three years ago, I stopped trying to cover it and just embraced it," she says.

Tonja suggests that anyone with vitiligo do their research to understand what it is, how it affects people, and what the treatment options are.

She was surprised by how little information was provided by her doctors and by the lack of support groups, not only in her part of the country but nationwide.

Tonja turned to her family, her friends, and her church for help and support. She also founded her own support group, called Beautifully Unblemished.

"I'm an extrovert, but I became very withdrawn when I started to lose color," she says. "I got a lot of stares and pointing because my nose was white but the rest of my face was black."

Tonja encourages others to be vocal and spread awareness about this common condition. For instance, she wants people to know it's not just a cosmetic disease—it has real physical and emotional effects.

"It's not contagious—it's an autoimmune disease," Tonja adds.

In addition to spreading awareness and offering support, Tonja also participates in research studies that look at the emotional side of the disease. She hopes this can help others.

Tonja says that her advocacy work and talking about the condition have actually helped her become comfortable in her own skin again.

"The very thing that brought so much pain to my life has also brought passion," she says. "I no longer feel sorry for myself."