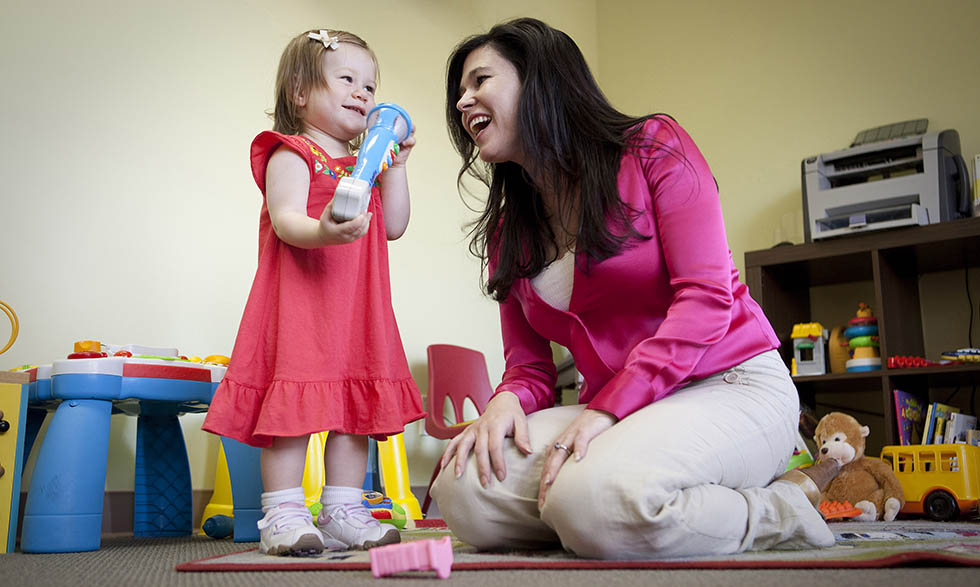 Karen Pierce, Ph.D., plays with a toddler referred to her program by a local pediatrician.

What if you could diagnose autism just by looking at how a child's eyes move?

While the technology is not quite that simple, an eye tracking system created by National Institutes of Health (NIH)-supported researcher Karen Pierce, Ph.D., and her team is paving the way for a simpler, more affordable tool for earlier diagnosis of autism spectrum disorder (ASD).

The screening tool, known as the GeoPref test, uses infrared light to follow a baby's eye movement as they watch a series of movies showing geometric shapes moving around. The tool has successfully helped diagnose children with autism at just 12 months of age, and in only minutes instead of hours.

Despite the findings of Dr. Pierce and other researchers that autism can be diagnosed in the first year or two of life, the average age of diagnosis in the U.S. is still 4 years of age. Diagnosis can occur even later in some racial and ethnic minority groups and in underserved communities, says Lisa Gilotty, Ph.D.

Dr. Gilotty is chief of the NIMH research program on autism spectrum
disorders. Prior to her current role in overseeing funding for autism research at NIMH, Dr. Gilotty studied the disorder for decades and is dedicated to helping the more than 3.5 million Americans living with autism.

A major concern of researchers is helping children with autism get support fast—which comes from early diagnosis.

"The ultimate goal is to give people with autism the same opportunities, to live the life they choose to live."

"A delay in diagnosis can have a profound cascading effect across development," says Dr. Gilotty. "We know that early intervention has been demonstrated to improve outcomes for young children with autism. So, there's a need to develop tools that are sensitive and valid to screen children earlier and engage them in services earlier."

That's why technology like what Dr. Pierce developed is key. It can take place right in a pediatrician's office with help from a trained provider and doesn't require hours of testing at a specialist's office.

"For the test, the baby sits on his mother's lap and is looking at a screen similar to a computer monitor, but at the bottom of the monitor there's an invisible, infrared light beam that's not visible to the baby," Dr. Pierce says. "The light beam bounces off the baby's cornea and the angle that the light is reflected back into the machine tells it where the baby's looking."

Some babies with autism do not examine the images they are seeing in the manner that is expected. So, if a baby shows abnormal eye gaze, 86% of the time they receive a diagnosis of ASD. Dr. Pierce hopes to roll it out to more pediatricians' offices and other health centers throughout the country in the coming years.

For parents who are concerned that their child may have ASD, Dr. Pierce says some common signs to look out for are restricted interests, activities, or repetitive body movements such as flapping hands or flicking wrists.

Other signs include reduced shared attention with parents. Shared attention includes things like looking at the same thing mom or dad is looking at—or checking to see if their parents are watching them play. Children with ASD have a hard time with these types of joint attention behaviors and often are delayed in doing things such as pointing, which is important for orienting other people's attention.

"Another early marker is challenges with shared enjoyment with someone other than the parent, say if you're playing peekaboo or tickling. Most typical children will show some enjoyment, but in children with autism, they often have a tough time with this level of engagement and enjoyment with people that are not their parents," Dr. Pierce adds.

She emphasizes that parents should meet with their pediatrician or other health care provider if they suspect their child may have autism.

"It's an important area because research has demonstrated that outcomes for autistic adults are generally worse than for other disorders," Dr. Gilotty says. "It's clear that they have a steep decline in their engagement and community once they leave secondary school and that can lead to further isolation."

Other promising NIH-funded studies are looking at how subtle changes in babies' brains as early as 6 months can show signs of autism and how that could one day be translated into screening. Additionally, researchers are looking more closely at the causes of autism and how autism can co-occur with other conditions like ADHD, anxiety, or depression.

"Understanding more about the causes of autism allows interventions and services to become more tailored and precise," Dr. Gilotty says. "The ultimate goal is to give people with autism the same opportunities, to live the life they choose to live."