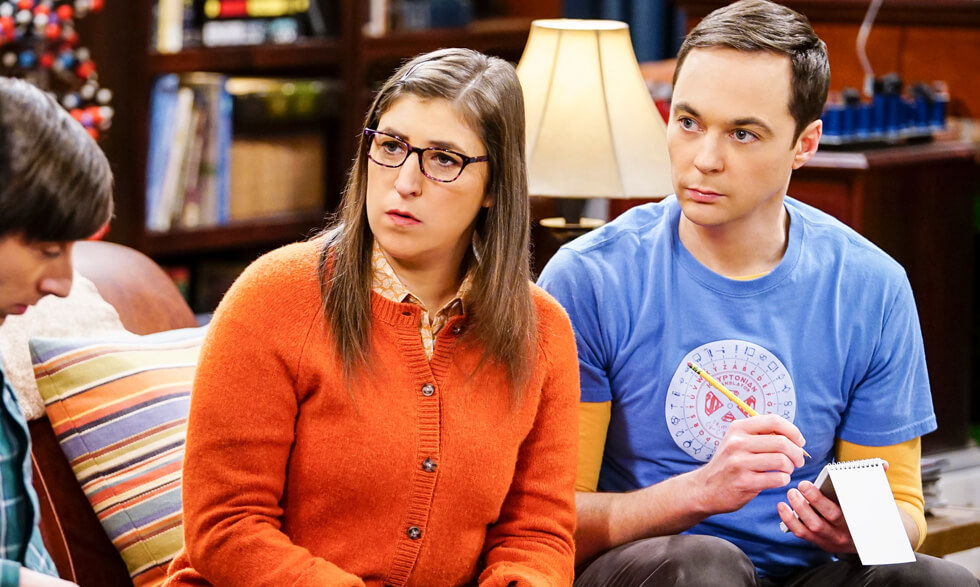 Mayim Bialik and Jim Parsons on the set of "The Big Bang Theory."

'First in Human,' a three-part documentary series from the Discovery Channel, follows four patients at NIH's Clinical Center, also known as the House of Hope.

"I felt so happy to know I was a small part of helping truly life-changing work like this go on."

Emmy and Golden Globe award-winning actor Jim Parsons has millions of fans worldwide. He stars in the hit TV show "The Big Bang Theory" and memorable movies like "Hidden Figures." Parsons recently produced and narrated "First in Human," a Discovery Channel documentary series that followed four patients at the NIH Clinical Center. He discussed his experiences visiting NIH and learning directly from NIH researchers and their patients with NIH MedlinePlus magazine.

Did you know about the NIH Clinical Center and its work before starting on "First in Human"?

What did you take away from working with the NIH doctors and nurses and the patients they served?

Oh, my goodness. Everyone who works at NIH on these trials has an ability to combine devotion to their work and passion and care of individual patients that borders on the profound. I suppose it's what everyone would hope to find in any health professional but I can't imagine one always does—this super-intelligent workhorse who is also so human and compassionate.

What was interesting to me about the patients was how individual and unique each seemed, while at the same time, they all had a certain aura of hope about them that was strikingly similar.

They were different from each other in so many ways—be it age, ethnicity, disease—and yet you sense about each of them this bright quality, a "looking toward the future."

What would you say to someone who might consider participating in a clinical trial?

Obviously it's a very personal and individual decision for each person and their family. That being said, I talked to one patient who described to me how her personal doctor had actively discouraged her participation in the trials the NIH offered.

Her doctor's reasoning was that she would be setting herself up as, essentially, a guinea pig for these researchers to experiment on. I understand the worry expressed because, as the name "trials" implies, it is, indeed, an experiment and, therefore, a process with guaranteed risk and no guaranteed reward.

In answer to this, though, I would reiterate what I said before about the doctors and nurses who are actually on the floors of the research facility at the NIH. They were universally caring, empathetic, and always erring on the side of not going through with a treatment or course of action if they felt it was too risky.

I would hope that more doctors could learn more about what they are really like. It's probably difficult for many to manage, but visiting the NIH Clinical Center itself would be eye-opening in this regard. It was for me.

What message do you have for Americans about the investment we make in medical research through NIH?

As taxpayers whose money helps fund the work at NIH and the trials they conduct, we should be extremely proud. That's how I felt when I visited NIH and when I watched the documentary we had made. I felt so happy to know I was a small part of helping truly life-changing work like this go on, if I also felt a little foolish for not knowing it was going on earlier in my life.

Interested in joining a clinical trial but not sure where to start? ClinicalTrials, a service of NIH, allows you to...