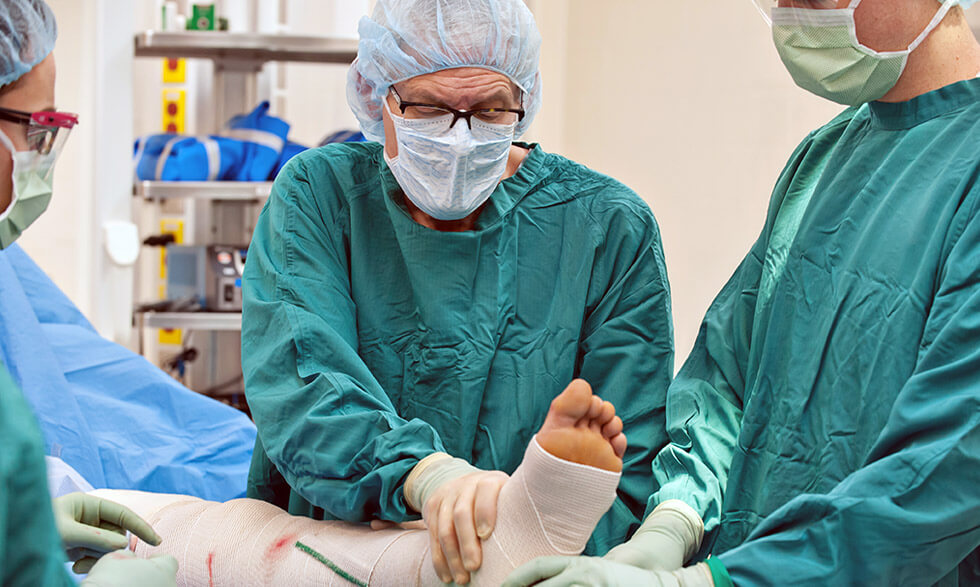 The Centers for Disease Control and Prevention estimates that nearly 900,000 people each year will develop deep vein thrombosis (DVT) or a pulmonary embolism (PE) in the U.S. Even more startling: Up to 100,000 people may die annually from one or both of these conditions.

Because of the prevalence and seriousness of vascular disorders like these, NIH is working to improve diagnosis, treatment, and prevention through clinical trials and other studies.

DVT—or a blood clot, usually in the legs—can be treated with either a blood thinner or the combination of blood thinners and a procedure that uses catheters to break up clots in a vein. The procedure is called catheter-directed thrombolysis.

During this procedure, health care providers insert a catheter into your leg to administer so-called “clot-busting” drugs directly into the clot, breaking it up, and allowing some of it to be sucked out of the vein through the catheters.

The findings from a recently completed trial—known as the ATTRACT trial for short—suggest that this procedure is often not needed. The trial is supported in part by NIH’s National Heart, Lung, and Blood Institute (NHLBI).

“Many clinics and hospitals rush into using the catheter-directed thrombolysis procedure as a first-line treatment to prevent the long-term complications of chronic swelling, pain, and discomfort, called post-thrombotic syndrome,” said Stephan Moll, M.D. “But we found that rush to be unwarranted.”

Dr. Moll is a professor of medicine and member of the UNC Hemophilia and Thrombosis Center at the UNC School of Medicine.

“The ATTRACT trial also demonstrated that while catheter-directed thrombolysis may not be optimal as a first-line treatment for general DVT, it may be substantially more effective in treating some specific DVT cases,” said NHLBI’s Andrei Kindzelski, M.D., Ph.D.

“This is being investigated currently in another NHLBI-supported clinical trial, known as the C-TRACT,” Dr. Kindzelski added.

Another NHLBI-supported research program looking to improve treatment for vascular disorders is the Vascular Interventions/Innovations and Therapeutic Advances (VITA) Program.

One of VITA’s other main goals is developing treatment for those with unmet medical needs. It connects the basic science of disease with human medicine.

“The program is unique in its mission to create innovation and accelerate research across the entire spectrum, bridging basic to clinical, clinical to practice, and population to health impact,” Dr. Kindzelski said.

The VITA program supports a number of translational research projects. One of them is led by Thomas Wakefield, M.D., and Daniel D Myers D.V.M., M.P.H. Their team performs vascular surgery research in the Conrad Jobst Research Laboratory at the University of Michigan. While they’ve been studying DVT for decades, they weren’t able to get funding support needed to translate their discoveries into clinical practice.

That’s where VITA came in.

“The VITA program allowed us to take a concept that we have been working on since the early 90s and move it into a study with human volunteers and two patients who actually had DVT,” Dr. Wakefield said. “It’s a very unique opportunity.”

They are testing new medicines that can prevent or break up blood clots—without increasing bleeding.

Going forward, Dr. Wakefield sees even more change coming to vascular research through programs like VITA. That includes an increased focus on personalized medicine, such as biomarker research, and a greater emphasis on coordinated research.

“I think we will see more team science in the next 10 to 20 years in all areas of research—including vascular research,” Dr. Wakefield said. “We see the best and fastest answers when a group of people who have different viewpoints and who bring different skills come to the table to address a problem.”

Michael Morizio knows how quickly life can change.  In August 2017, Michael was playing the kind of competitive tennis he...