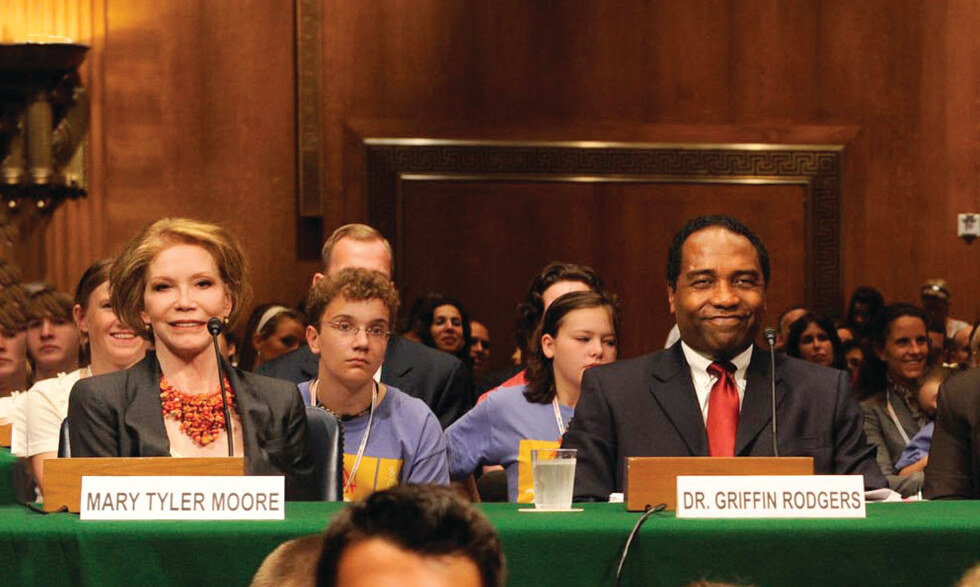 Mary Tyler Moore and Griffin Rodgers, M.D., M.A.C.P., advocate for type 1 diabetes funding in front of a congressional panel on Capitol Hill in 2009.

A little more than 10 years ago, Mary Tyler Moore helped launch the first issue of NIH MedlinePlus magazine on Capitol Hill. The award-winning actress and diabetes research advocate was also featured on the first cover of the magazine. She passed away this January at the age of 80.

Moore, who was diagnosed with type 1 diabetes at age 33, advocated for the advancement of diabetes research throughout her life. In addition to working with the National Library of Medicine and NIH, Moore also worked with JDRF (formerly known as the Juvenile Diabetes Research Foundation). She served as the international chair for the organization.

"Mary Tyler Moore was an inspiration for so many of us in the diabetes community."

"Mary Tyler Moore was an inspiration for so many of us in the diabetes community. Her decades of service raised the voice of all people with type 1 diabetes, and her tireless work behind the scenes will accelerate research progress for years to come.

Mary Tyler Moore is proof that one person can make a positive difference for all, and she will be much missed," said Griffin P. Rodgers, M.D., M.A.C.P., director of the National Institute of Diabetes and Digestive and Kidney Diseases (NIDDK).

In 2006 Moore met on Capitol Hill with House and Senate lawmakers, former NIH director Elias Zerhouni, M.D., NLM leadership, and the Friends of the National Library of Medicine to give even more visibility for medlineplus.gov and its diabetes resources. MSNBC, Self magazine, Health magazine, and other media featured Moore's role as an advocate by citing, linking to, or using images from NIH MedlinePlus.

"I champion the efforts that are being made through NIH MedlinePlus to provide easily understandable and reliable information on behalf of all people and their families affected with diabetes," Moore told the magazine in 2006. "I am honored to be part of the launch of this new publication."

Thanks to investments in research, new and improved methods for managing type 1 diabetes are on the horizon, including the artificial...