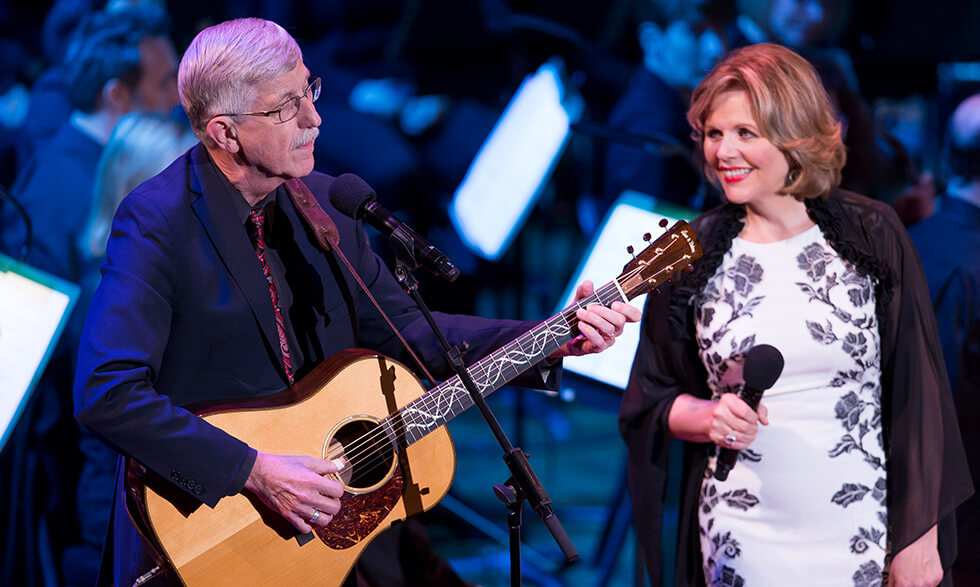 Can music help us learn? Can it ease chronic pain? Can it improve your health in general?

These are important questions being studied by the National Institutes of Health (NIH) and the John F. Kennedy Center for the Performing Arts, in collaboration with the National Endowment for the Arts.

The joint initiative, Sound Health, is exploring the intersection between music, the brain, and wellness. It brings together leading researchers, music therapists, and artists to better understand the impact of art on the mind and body.

Just this fall, NIH announced that it would be supporting up to 5 million dollars for research exploring music’s impact on our health.

How sound affects the brain

“One of the aspects that makes this field so exciting is the potential broad impact, from basic science to enhanced therapies, and across the lifespan from newborns to aging populations,” says Thomas Cheever, Ph.D.

Dr. Cheever is staff assistant to Dr. Collins for the Sound Health initiative and director of the Muscle Disorders and Therapies Program at the National Institute of Arthritis and Musculoskeletal and Skin Diseases.

“For example, there are stroke survivors who know what they want to say but can’t speak it. That is called Broca’s Aphasia,” Dr. Cheever says. “The part of the brain that allows ordinary speech is damaged. In one example, a patient who wants to say, ‘I am thirsty,’ can’t say it, but, when it’s attached to a melody, can sing it, and this can translate into improved speech during recovery.”

Broca’s Aphasia and related topics were included in a June 2017 article about the initiative in the Journal of the American Medical Association. The article was written by NIH Director Francis Collins, M.D., Ph.D., and world-renowned soprano Renée Fleming.

Dr. Collins has also established a trans-NIH working group to further support and develop this research area. The response, notes Dr. Cheever, has been remarkably widespread across NIH institutes, centers, and offices.

“We’ve studied, at some levels, how music and the brain interact, but we really haven’t had the tools to look at it as precisely as we can now,” Dr. Collins says.

Using things like music therapy and imaging technology, scientists (including some supported by NIH) are starting to understand how sound impacts health and well-being.

“A growing number of reports are appearing where music therapy has provided benefit to individuals with medical conditions as diverse as autism, chronic pain, and stroke,” he explains. “But there is so much we still don’t know about the effects of music in health broadly, and this partnership will help us to explore this uncharted territory.”

‘Music and the Mind’

Music and health research has extended beyond the lab and onto the stage.

On Sept. 6 and 7, 2018, NIH hosted the second annual “Sound Health: Music and the Mind” event, a series of performances, lectures, and hands-on workshops at the Kennedy Center in Washington, D.C.

The event brought leading researchers in the field and performers to explore the intersection of music and science.

“We can both care about the arts, and we can care about science. And we can look at a place where they intersect as an exciting opportunity to observe what being human is all about,” Dr. Collins says.

The event looked at many types of sound and health interactions, including:

All performances are available to watch online.

‘Music and the Mind’: NIH event explores how sound impacts our health

This September, the National Institutes of Health (NIH) welcomed leading musicians, researchers, and guests from around the country to the...

How sound travels through our bodies

Have you ever wondered how sound waves turn into the noises we hear every day? The National Institute on Deafness...