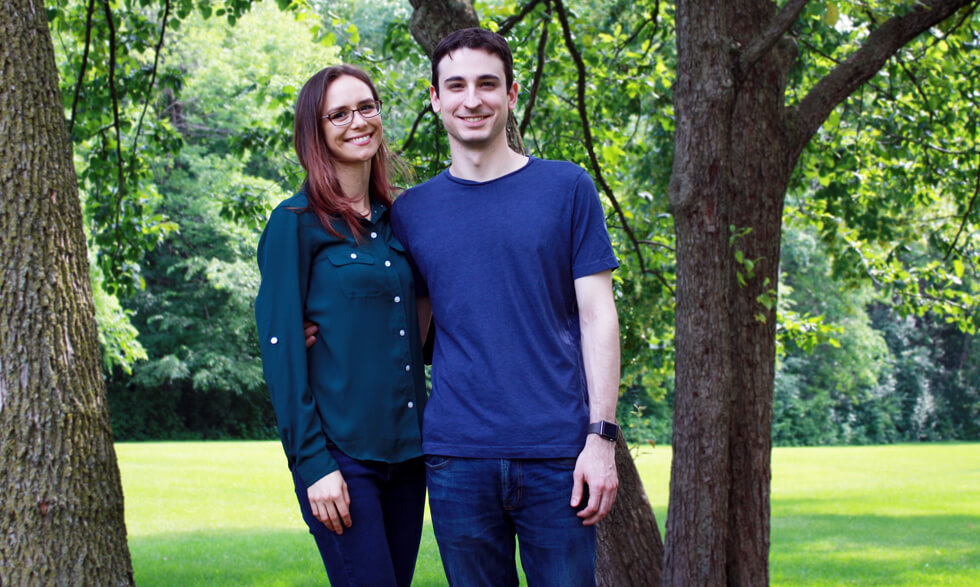 Rose Perry and Jack Gottschalk are partners. They also both have celiac disease, an immune condition in which you have to avoid gluten to stay healthy. They shared their story with NIH MedlinePlus magazine.

When Rose Perry was in high school, she developed a skin rash and didn't know why. It was a complete mystery to her and her family.

After six months, she finally knew what was wrong. A skin biopsy revealed she had dermatitis herpetiformis, which then led to the diagnosis of celiac disease.

She and her mom had to make a number of changes. Their work started in the kitchen. They got rid of all foods containing gluten in their house. They also threw away food that had come into contact with gluten-containing foods.

Then Rose had to go through her beauty products and toss any soap, shampoo, or other products that contained gluten. Since those products could come in contact with her mouth, they could cause accidental gluten exposure.

Living at home, she had control. College was going to be different. As a student at Iowa State University, Rose had to learn about the school's resources for students living gluten-free. She adapted to her new lifestyle.

For some people, college is the best time of life. It wasn't for Jack Gottschalk. He felt too sick to enjoy himself.

"I felt sick all the time. I couldn't eat anything and feel good afterwards," said Jack.

As a swimmer at York College in Pennsylvania, Jack often had pasta parties with his teammates. He never guessed that the delicious pasta was causing him trouble.

The summer before his senior year, Jack was diagnosed with celiac disease. It turns out that most pasta is primarily made with gluten.

He was surprised to learn that there was only one treatment: Jack had to follow a strict gluten-free diet. "There isn't really anything you can do for this," he said. "You're going to have to live differently and that's kind of a shock."

Rose and Jack met in 2015. She was attending grad school in Maryland, where he lived.

In addition to their Maryland residency, it turns out they had one more thing in common. They both have celiac disease.

"It's a huge advantage to have a partner with the same dietary restrictions," Rose said. "Knowing that you have somebody who is going through something similar and understands how serious it is, you're not going to get questions all the time like, 'Is that really necessary? Do you have to do that?'"

Jack says it makes things easy to have an entirely gluten-free home. Both he and Rose say they never have to worry about grabbing something out of the pantry to snack on.

"I can live a totally normal life within the confines of our home," Jack said. "It fades into the background and you don't even remember it half the time when you're at home because it's not something you have to worry about actively."

The two have found, as so many with celiac disease have, both benefits and frustrations with the rise in people choosing a gluten-free lifestyle. "The awareness of celiac disease and gluten-free diets has been both a blessing and a curse," Rose said.

Since they were diagnosed, there are many more foods they can eat. They are both happy with the expanded gluten-free offerings and accommodations they've found, but food labels can still be challenging.

Rose explained that often they will find a product labeled gluten-free, only to turn the package over and read that it was made in a facility that processes wheat.

"It does lead to a lot more accidental exposures," Rose said. "People will try something new thinking that it will be okay and it isn't."

Over time, Rose and Jack have become used to their gluten-free lives. They hope others faced with the same diagnosis will not be too worried about the adjustment. "It's not as bad as you think it is," Rose said.

Jack recommends that those who are newly diagnosed take time to explore new food options and be prepared for things like social gatherings. He says you should still go to parties and get togethers—just bring your own food.

"It's really not a big deal, especially compared to the peace of mind you'll have knowing your food is safe," Jack said.

Rose and Jack enjoy busy lives. Rose is a medical and scientific illustrator and Jack is a retail professional.

Dealing with celiac disease is just one aspect of their lives.