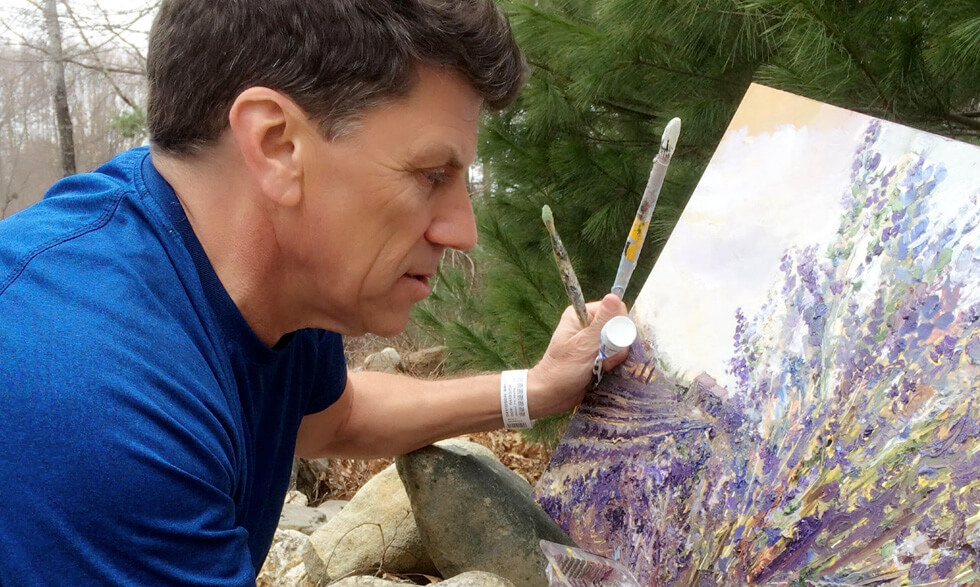 Bruce Davidson paints a picture of lavender in Maynard, Massachusetts.

Bruce Davidson always enjoyed the outdoors. He owned and operated a landscape contracting business in the early 2000s in Boxborough, Massachusetts. It was this job and location that put him exactly in many ticks' paths.

"My work was certainly making me vulnerable to tick bites. I was always outside in high grass, low grass, thickets, brush," Davidson said. It was a "high-risk environment."

In the spring of 2005, Davidson first suspected he had Lyme disease. He went to his general physician with flu-like symptoms, including headaches and sore muscles. During the visit, Davidson mentioned his symptoms sounded familiar to those of many friends who had Lyme disease.

"I was starting to feel a slow eroding," Davidson explained. "My energy was going. I'm typically high-energy and fit."

Unfortunately, Davidson's primary physician at the time did not consider a potential Lyme disease diagnosis and instead gave him a round of general antibiotics. He began to feel better, but his symptoms appeared again and worsened by August of that year.

"I was starting to feel a slow eroding," Davidson explained. "My energy was going. I'm typically high-energy and fit." He had difficulty breathing and would at times hear a high-pitched white noise. He initially thought he had a summer cold, but as his symptoms worsened, he went to the Emerson Hospital emergency room in Concord, Massachusetts.

"I was surrounded by lots of doctors and I think they were giving me an electrocardiogram, which tests for electrical activity in the heart, and I heard somebody say in a chilling way, 'Look at the P waves on the screen. Is the machine broken?'" Those waves were signaling a complete heart block, something only a small percentage of Lyme disease patients' experience.

Davidson was quickly admitted to the intensive care unit (ICU) where he was treated by Scott Paparello, M.O., of the infectious diseases unit. Dr. Paparello confirmed Davidson's initial suspicion of Lyme disease and began treatment immediately. Intravenous antibiotics treatment began to resolve the atrioventricular block (AV block) and a planned pacemaker operation was canceled. Davidson spent the next three days in the ICU.

When Davidson was released from the hospital, Dr. Paparello said he believed Davidson was cured and would experience no long-term effects. He has since had tick bites that have resulted in a tell-tale bullseye rash, and each time he received a course of doxycycline antibiotics from his doctor. He hasn't had any relapses.

Since his recovery, Davidson has become "hyper-focused" on art and uses these talents to help others.

"I decided I'm going to aggressively improve my artistic skills and bring them to a point where I'm going to represent the things that I love in art," he explained. In addition to producing art and teaching, he works with the Make-a-Wish foundation creating pieces for those in need.

"In 2007, I started painting murals for people," he explained. "The first one I did was for my 99-year-old neighbor at the nursing home." The piece was a landscape of the area she lived in, complete with images of the flowers that bordered the yards.

"Get all the information you can from lots of different sources," Davidson said. "Do be an advocate for yourself and don't always take one opinion,"he said. "I wouldn't have been at such a risk if I had not waited until I was in peril."