From caring to commitment

During her sister's battle with Alzheimer's, Anne Murphy stayed by her side and continues to help fight the disease today 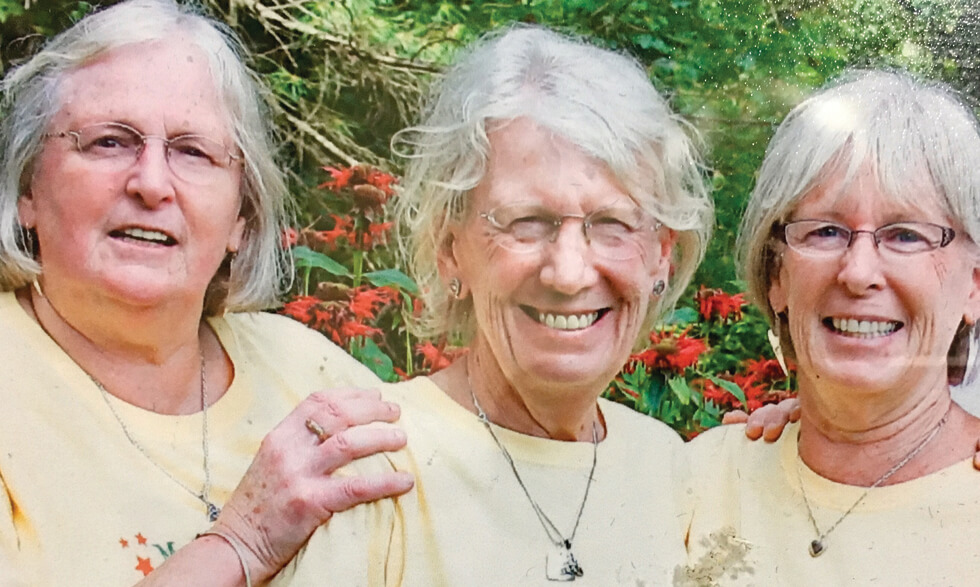 Anne Murphy, left, is pictured with her sisters Jean, middle, and Mary, right.

Anne Murphy and her sister Jean did nearly everything together from childhood to adulthood.

As adults, they often started the day bringing coffee to each other's houses, located directly next door in Concord, Massachusetts. Then they set out for yard sales, museums, or the beach.

They both worked as nurses, volunteered, took care of each other's children, and also looked after each other. "Jean was always taking care of me and telling me what to do from the earliest age," Anne recalls.

But that all changed in 2011, when Jean started losing her memory.

"She had a hard time remembering things and finding her way," recalls Anne. She could no longer write out checks at yard sales.

They both were already aware of Alzheimer's and dementia. Their older brother died of dementia and complications related to Parkinson's disease at age 62. Jean agreed to be evaluated at age 64 and was understandably upset when she heard the results.

As Jean's Alzheimer's progressed, Anne says she did her best to talk to Jean as much as possible and keep her active. "Jean, my sister Mary, and I would do 'girls' day' once a week. We played cards and brain games," Anne says.

As time went on, Anne focused on talking to Jean and letting her know she was still by her side. "I'd say to her, 'I still see you, you are right here,'" says Anne.

Jean was taken care of by her husband, who is also a nurse, her children, and Anne in her own home.

"It's difficult for anyone dealing with a loved one who has Alzheimer's disease," Anne says. "She was older than me, always fixing my hair, always fussing with me. After she lost her speech I knew she was still fussing with me, as her forehead would become wrinkled, but she couldn't say what was on her mind."

Jean had lost her speech, but like many people with the disease, she could still sing or hum tunes.

"I feel like I am contributing to finding an answer to the big brain puzzle."

Advice for Other Families

When Jean died at age 69, Anne was devastated, despite knowing the day would come.

Since then, Anne has decided to enroll in clinical studies to help Alzheimer's research. "At first I was hesitant to sign up, but now I'm glad that I did," Anne says. "I feel like I am contributing to finding an answer to the big brain puzzle."

Anne's advice to those who care for loved ones with Alzheimer's: don't give up.

"Never stop being present with them. Never think for a minute they are gone. Enjoy them wherever they are." She suggests talking about family memories or pointing out surroundings.

"Most of all, be able to sit and deal with silence," Anne adds.

David Kaye never thought anything could hurt him. He spent 25 years in the Army as a Green Beret and served...