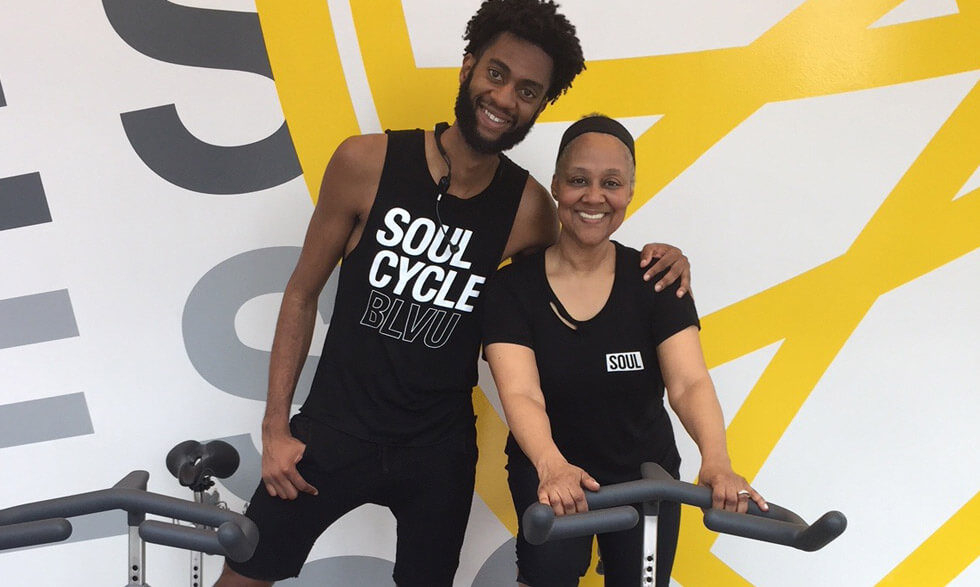 Vikki Owens with her spin instructor.

That is how 61-year-old Vikki Owens of Seattle, Wash., describes her 25-year battle to manage her fibromyalgia.

Diagnosed in 1993, Vikki at one point was taking nine drugs, including painkillers, muscle relaxants, headache and sleep meds, and antidepressants. None of them gave her much relief. It wasn’t until 2009 that she finally developed a regimen that gave her back her life.

Today, thanks to exercise, therapy, massage, herbal and vitamin supplements, and a change in diet, Vikki has been able to slowly wean herself off prescription drugs.

“As patients, we’ve been conditioned to expect a magical pill to solve everything, but we have to start owning our own health.”

“For the last three years, I have been able to fully function as a normal person,” she says. In fact, she adds proudly, “On my 60th birthday last year, I went to an indoor cycling class. And now I go twice a week.”

Listening to her, it’s hard to believe that this optimistic, energetic woman once could barely walk her three children to school in the morning. “I would walk with them there, but on the way back I would have to stop and sit and cry, I was in so much pain.”

Doctors tried to help her. “They would give me medications they thought would help, but it didn’t. It just made it hard to function.”

The continued pain, depression, and other mental side effects, known as “fibro fog,” made it difficult to keep a job or do things with her husband and children. “Some days the pain was so bad, I couldn’t get out of bed.”

What changed, Vikki acknowledges, was her attitude and determination to find a better way to manage her health.

“As patients, we’ve been conditioned to expect a magical pill to solve everything, but we have to start owning our own health,” she says. She knew that with fibromyalgia, the nervous system amplifies how the body senses pain. The question was how to quiet those pain messages without drugs.

She read about supplements that could be helpful as well as other kinds of approaches—such as massage therapy, tai chi, yoga, and cognitive behavioral therapy—on the website for NIH’s National Center for Complementary and Integrative Health.

Cognitive behavioral therapy helped her feel more stable, she says. And an herbalist she consulted suggested some supplements and dietary changes.

She also forced herself to become more active.

“I didn’t want to exercise because I was in so much pain, but you have to move,” she says. She began slowly, first with tai chi, then yoga and dance before finally trying the high-energy, indoor cycling classes. She credits exercise with increasing both her stamina and her emotional stability.

Today, Vikki and her husband run an IT consulting firm. Her days are busy and satisfying. When asked for advice for other fibromyalgia patients, she’s forthright: “Don’t be a victim. Take it one day at a time and find something that works for you.”