Could Judy Perkins’ own immune system help fight her cancer? 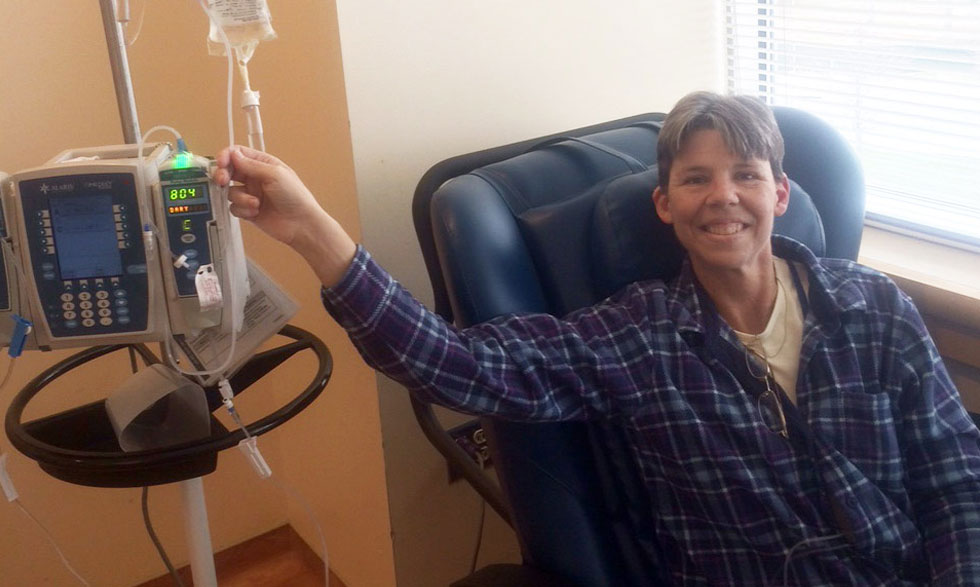 Judy Perkins receiving an infusion of tumor-infiltrating lymphocytes as part of her cancer treatment.

When Judy Perkins got the diagnosis of stage IV metastatic breast cancer, or breast cancer that has spread, she felt defeated.

"It was pretty much a death sentence," she says now. "I thought I knew all the treatments, and I had run out of treatments."

It was Judy's diagnosis that led her to become active in the National Breast Cancer Coalition and advocate for other breast cancer patients. "In July 2015, I took a class designed to bring breast cancer advocates up to speed on all the science," Judy said.

The class is where she met Stephanie L. Goff, M.D., a member of a pioneering cancer research team at NIH. Dr. Goff works with Steven A. Rosenberg, M.D., Ph.D., of the National Cancer Institute (NCI) in Bethesda, Maryland.

Dr. Goff mentioned to Judy that the surgery branch of NCI was running a clinical trial on immunotherapy at NIH. It sounded like it might be a good match for Judy's case. Judy had already participated in clinical trials before with mixed success, but she was open to another chance.

Following their meeting, Judy participated in a screening test with Dr. Goff and Dr. Rosenberg and was later accepted into the trial.

A chance with a clinical trial

To treat Judy, Dr. Goff and her researchers sequenced (or studied the structure of) the DNA and RNA in one of her cancerous breast tumors and in her normal tissue. They wanted to see which mutations were unique to her cancer.

The procedures took place at the NIH Clinical Center hospital in Bethesda.

The researchers tested different cells that specifically target tumor mutations to see if they could shrink tumors. They then put those anti-tumor cells back into Judy's body.

"I knew within 10 days that things were moving in the right direction."

Then as part of the immunotherapy treatment, Judy underwent more chemotherapy and had a catheter-like port inserted into her body to infuse the anti-tumor cells.

"We took the lymphocytes (white blood cells) that were in Judy's body—the warriors of her immune system—that are constantly circulating throughout her body," says Dr. Rosenberg, who supervised the trial. "We especially wanted the tiny number of lymphocytes that recognized the mutations in her cancerous tumors. And we increased the number of those cells to treat Judy with her own anti-tumor cells. This is, to me, one of the most exciting areas of immunology research."

Judy knew right away that this treatment was different.

"I knew within 10 days that things were moving in the right direction," Judy said. "Before I left the Clinical Center around Christmas 2015, I knew that the tumor was starting to get a little softer and was shrinking. But I didn't know whether it had to do with the infusion. It could have just been from the chemo. I knew it was a positive thing. I just didn't know if it was going to continue."

But it did continue. The tumor had dissolved, along with her other tumors. "My energy had come back," said Judy. "I knew that this was a way different response from anything else I'd had. This was big."

It was the best Christmas gift of Judy's life. She has felt better ever since that winter in 2015.

Judy urges other cancer patients to explore clinical trials and see if they may be the right fit for their condition.

"At first, I wanted to 'find some magic' for myself," Judy says. "Later, as I got sicker and less hopeful about 'finding the magic,' I figured that it might do some good for people coming after me."

She recommends that people speak with their health  care provider to make the best decision for their case and that  they  speak up immediately if they have any concerns or questions during a trial.

"If you participate, you should be aware that if something doesn't feel right, you should discuss this immediately with your doctor," Judy says. "Sometimes the side effects are unknown and you really need to pay attention and speak up.

My philosophy for all of my treatments was to prepare for the worst and hope for the best."

Judy ended up "finding some magic" after all. After three years, she remains cancer free.