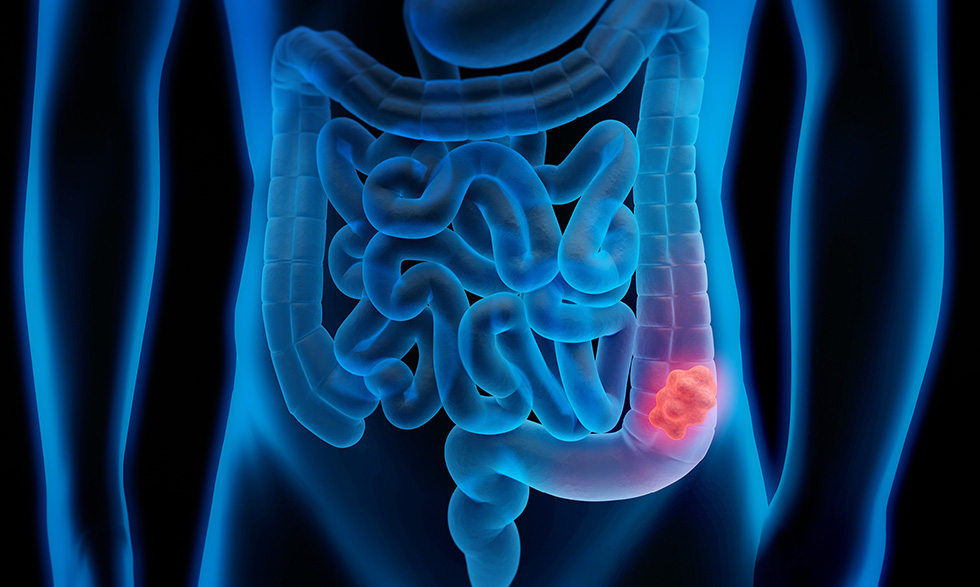 A diagram of the digestive system, including the colon, rectum, and anus.

Colorectal cancer is the third leading cause of cancer-related deaths among men and women in the United States, with 151,030 new cases estimated to occur this year. "Colorectal cancer" can refer to any cancer that forms in the tissue that lines the inside of the colon or rectum. While some people are at higher risk than others, anyone can get colorectal cancer. Screening is important to detect the disease and remove precancerous polyps before they become cancerous.

What are the symptoms of colorectal cancer?

The following symptoms can be caused by other conditions, but people experiencing them should consult their doctor:

Who is at risk for colorectal cancer?

Rates of colorectal cancer are also higher for Black people and non-Hispanic American Indians/Alaska Natives than any other racial or ethnic groups.

As you get older, your risk increases. The U.S. Preventive Services Task Force recommends colorectal cancer screening for adults ages 45 to 75 of average risk. Screening for patients ages 76 to 85 is recommended for select individuals. Colorectal cancer is still rare among adults younger than 50, but these rates are increasing. You should consult your doctor about screening methods and frequency.

How is colorectal cancer screened?

Colorectal cancer is detected using a range of procedures, some invasive and some not. These include colonoscopies, stool tests, and sigmoidoscopies. Abnormalities, including lesions or polyps found during a screening, will be tested for cancer. A new approach is to check blood samples for genetic material that polyps or tumors may release into the bloodstream.

How is colorectal cancer treated?

Treatment for colorectal cancer depends on the type and stage of a person’s disease and may be combined. Standard treatments include:

If your doctor finds colorectal cancer, they may recommend more tests to see whether the disease has spread to other parts of the body. Colorectal cancer can spread through tissue, the lymph system (organs that help fight infections and move fluid through the body), or the blood. This development is called metastatic cancer and is the most advanced stage.

NCI has several resources available, including a list of questions you may want to ask your doctor if they recommend treatment for colorectal cancer. It’s important to talk to your doctor about not only what will happen during the treatment itself but possible side effects and how any other medications, dietary supplements, or drugs you may be taking could affect the treatment.

Remember that colorectal cancer can come back even after being treated. It’s important to continue the screenings your doctor recommends so they can restart treatment if the disease returns.

If you or a loved one are diagnosed with colorectal cancer, you are not alone! NCI has information for both patients and caregivers about managing and recovering from colorectal cancer, including questions to ask your doctor and how to connect with support groups.

Several projects are underway with support from the National Cancer Institute, including:

As part of the Cancer MoonshotSM, the ACCSIS (Accelerating Colorectal Cancer Screening and follow-up through Implementation Science) program comprises eight research projects to increase the rates of colorectal cancer screenings, follow-ups, and referrals to care. ACCSIS has a special focus on racial and ethnic minority populations, rural communities and difficult-to-reach areas, and other underserved groups. Read more about the ACCSIS project.

People ages 50 to 69 who have had one or two small, noncancerous polyps completely removed during a colonoscopy within the past four years may qualify to participate in the FORTE (Five- or Ten-Year Colonoscopy for 1-2 Non-Advanced Adenomatous Polyps) study. This research aims to help determine how long such people can wait for a follow-up screening after a routine colonoscopy. Read more about this study.

COMMIT (Combination Chemotherapy, Bevacizumab, and/or Atezolizumab in Treating Patients with Deficient DNA Mismatch Repair Metastatic Colorectal Cancer) is a nationwide study that looks at a combination of treatments for people with metastatic colorectal cancers whose tumors are deficient in DNA mismatch repair. Read more about this study, including eligibility requirements for participating.

The five-year survival rate for localized-stage colorectal cancer (the earliest stage) is about 90.9%.

An early and correct cancer diagnosis gives patients the best chances for successful treatment. One step toward an earlier diagnosis...

Jack C. remembers that day well. The seemingly healthy 65-year-old suddenly had chest pains. But, he had a busy day...