Sunscreen in the winter?

Sun damage is still a risk during colder months 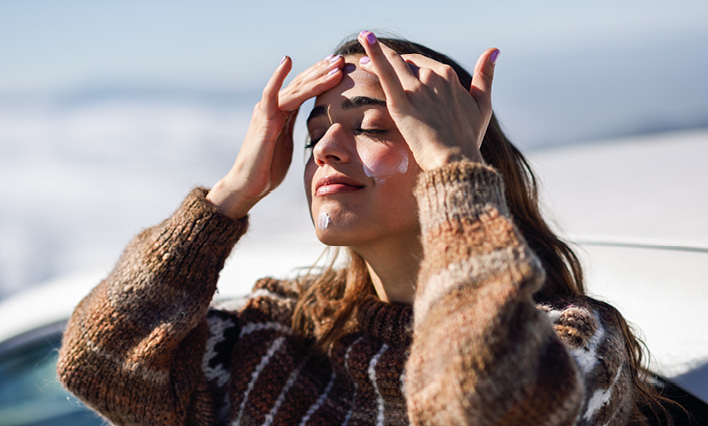 Sunscreen is usually associated with beaches, the pool, and sweltering summer days. We spend less time outside in winter, and when we do, we bundle up to protect ourselves from the cold. Ultraviolet (UV) levels (the amount of damaging rays from the sun) are lower in the winter because the earth tilts away from the sun. However, temperature and UV levels are less connected than you might think.

Aging is a natural and unavoidable part of the skin’s lifecycle, but prolonged or serious sun damage can make your skin age prematurely. The sun causes as much as 90% of the visible skin changes commonly attributed to aging, and protection from UV radiation is the simplest way to avoid it.

Why we think we are safe from UV rays in winter

UV levels are invisible to the human eye, but the skin can still feel them—even in the winter. Their radiation passes through and can damage skin cells. Skin cancer is the most common type of cancer in the United States. That is why the National Cancer Institute (NCI) recommends wearing sunscreen and limiting direct sun exposure during peak daylight hours (10 a.m. to  4 p.m.) all year round. And since clouds can only reduce UV levels by about 50%, it’s also important to wear sunscreen on cloudy days. Be sure to put on sunscreen with an SPF of 30 or higher on uncovered areas like your face and ears when outside. Wearing a winter hat or earmuffs is another way to shield parts of the face and ears from damaging UV rays.

Alaska Natives invented sunglasses thousands of years ago to shield their eyes from the reflection of sunlight off the snow.

Sunburn is just one kind of sun damage and may fade in a matter of days, but overexposure to the sun can cause changes that only appear many years later. UV exposure can cause your skin’s texture to change, wrinkle, bruise, and tear more easily. The sun also causes the appearance of tiny blood vessels in the skin especially on the face.

Brown spots and large freckles, also known as age spots or liver spots, may appear on frequently exposed areas such as the hands and arms—especially in lighter-skinned people—and may appear as small white spots and red patches.

Precancerous skin changes may include actinic keratoses, which are red, scaly lesions on the face, ears, and backs of the hands, as well as a condition called actinic cheilitis when it occurs on the lips. A doctor should also check for these and any other changes to your skin.

Snowsport lovers and hikers have a higher chance of skin damage during the winter months. The clear, dry air in the mountains can increase UV levels, which get higher as you go up the mountain. In the Alps, for example, UV levels can increase by roughly 6% for every 1,000 feet. Snow also reflects UV rays, which can damage vision and potentially increase your risk for melanoma (skin cancer) of the eye. Photokeratitis, or snow blindness, is also a painful eye condition caused by exposure to UV rays reflected from ice and snow. Before hitting the slopes, make sure to wear UV-protection goggles or sunglasses to help protect your eyes from damaging UV rays. 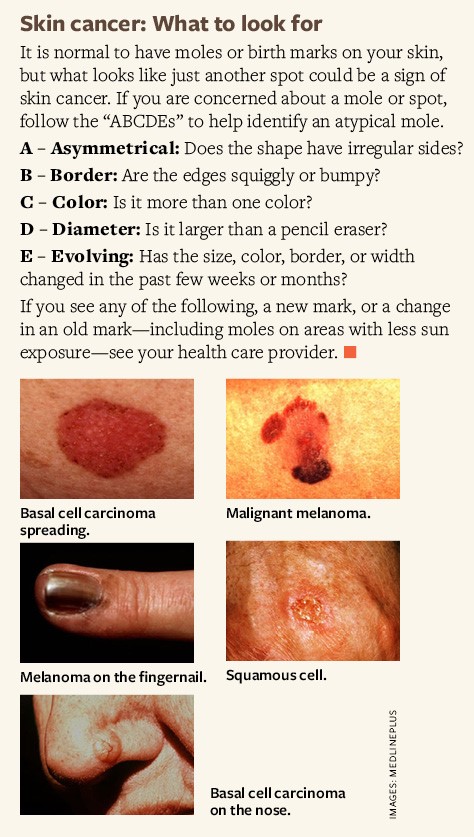 Immunotherapy before Surgery Appears Effective for Some with Melanoma

A study by the SWOG Cancer Research Network found that giving melanoma cancer patients the immunotherapy drug pembrolizumab both before and after surgery substantially lowered the risk of the cancer coming back compared to patients who received the only drug after surgery. The findings do not show whether the drug improves patients’ lifespans overall, but researchers believe guidelines for oncologists could be revised as a result. The SWOG Cancer Research Network is part of NCI’s National Clinical Trials Network and its Community Oncology Research Program. Read more about this study.

The study hypothesis is that IMEDEEN® (a supplement brand) will affect skin health, including changes to skin appearance, skin density, moisture, and fine lines and wrinkles, when compared to a placebo over a six-month intervention period. Read more about this study.

A recent study led by researchers at the National Cancer Institute showed that individuals born with mutations in the POT1 gene are prone to developing spitzoid melanomas (a rare subtype of melanoma that usually occurs in children). NCI is recruiting participants for ongoing research around
spitzoid melanomas to learn how genetic and environmental factors contribute to development of the cancer and related conditions. Read more about this research.

Myth: Only people with light skin need to wear sunscreen.

Fact: All skin tones are at risk of sun damage and developing cancer. Melanin—the natural pigment in skin, hair, and eyes—protects skin cells by absorbing UV rays. Darker-skinned people are less prone to sunburn but can still develop skin cancer.

Judy Congdon is fair skinned, light eyed, and freckles easily. Those qualities alone are risk factors for many types of...

In 2006, architect Eric Ward had a mole examined on his face by a dermatologist, or doctor who treats the skin....