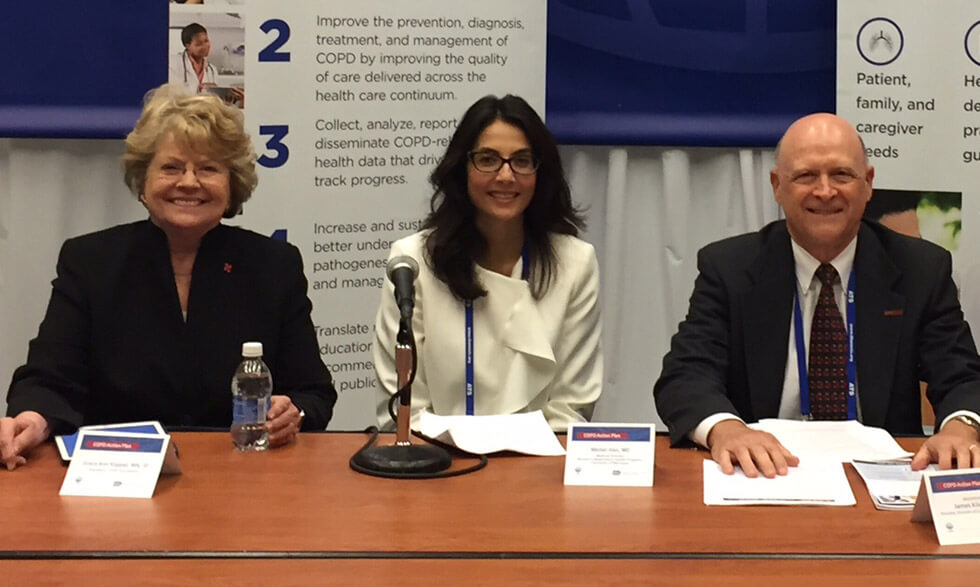 James P. Kiley, Ph.D., is the director of the Division of Lung Diseases at NIH's National Heart, Lung, and Blood Institute (NHLBI). In 2017, NHLBI launched a national action plan on COPD to empower patients and support COPD research and education. Dr. Kiley, who helped lead the launch, answered questions for NIH MedlinePlus magazine.

In May, the ﬁrst COPD National Action Plan was announced by (left to right) Grace Anne Dorney Koppel, president of the COPD Foundation; MeiLan K. Han, M.D., M.S., medical director of the Women's Respiratory Health Program at the University of Michigan Health System; and James P. Kiley, Ph.D., director of the Division of Lung Diseases at the NIH's National Heart, Lung, and Blood Institute.

Why was the COPD National Action Plan created?

The staggering numbers associated with COPD highlight the need for a coordinated national approach to deal with the critical issues around this chronic disease. This is the first-ever blueprint for a multipart, unified fight against the disease. It was developed at the request of Congress, with input from the COPD community.

Eight of 10 cases of COPD are caused by smoking. Why hasn't that statistic changed in a while?

Cigarette smoking rates have been going down, but COPD takes 20 to 30 years to show its symptoms. We are now seeing the effects of smoking that go back two or three decades ago, when smoking rates were much higher.

Women make up 56 percent of COPD cases, while men make up 44 percent. Why is that?

We know that more women die from COPD than men. Several factors could be responsible. Men and women are biologically different. They may respond differently to the toxic substances that cause COPD. Also, women survive longer with COPD than men.

Have the genetic research efforts on COPD improved in recent years?

Understanding the causes of COPD is complex. Genetic research efforts—for example in the NHLBI COPD Gene program—are highlighting specific traits associated with COPD. These approaches are becoming more powerful as more studies are included in the analyses.

More needs to be done to understand how these genes interact with the toxicants, like cigarette smoke, that cause COPD.

The most direct connection remains with the deficiency of the protein alpha-1 antitrypsin, a blood protein that limits inflammation in the lungs. People who lack a functional alpha-1 antitrypsin protein are at greater risk of developing COPD—with and without exposure to cigarette smoking.

Beyond genetics, have there been any other important NIH-supported research studies or findings on COPD in recent years?

NHLBI funds a wide range of research directed toward the reduction of COPD cases and COPD-related death:

Why is it important to tell your primary-care health provider about tobacco use, either by you or by someone you live with?

Like all chronic addictions, quitting smoking usually requires teamwork between the patient and the primary-care health professional. Medical and behavioral support are often needed together for a successful outcome.

Primary-care health professionals can direct the patient to helpful resources.

What is pulmonary rehabilitation and why is it important for COPD patients?

Pulmonary rehabilitation is a treatment for patients with chronic lung diseases like COPD. It provides patients with exercise, education, and support.

The primary goal is to help patients achieve their maximum level of independence and functioning. It benefits exercise tolerance, symptoms, and quality of life, with a reduction in the use of health care resources.

Pulmonary rehabilitation involves a long-term commitment from the patient and a team of health care providers. The team may include respiratory therapists, physical and occupational therapists, dietitians or nutritionists, and psychologists or social workers. Patients usually receive care at an outpatient program in a hospital or clinic.

Too 'stubborn' to give in to COPD

"I was blessed with a fine case of the 'stubborns'" says Jim Nelson, a 77-year-old retired accountant living in...