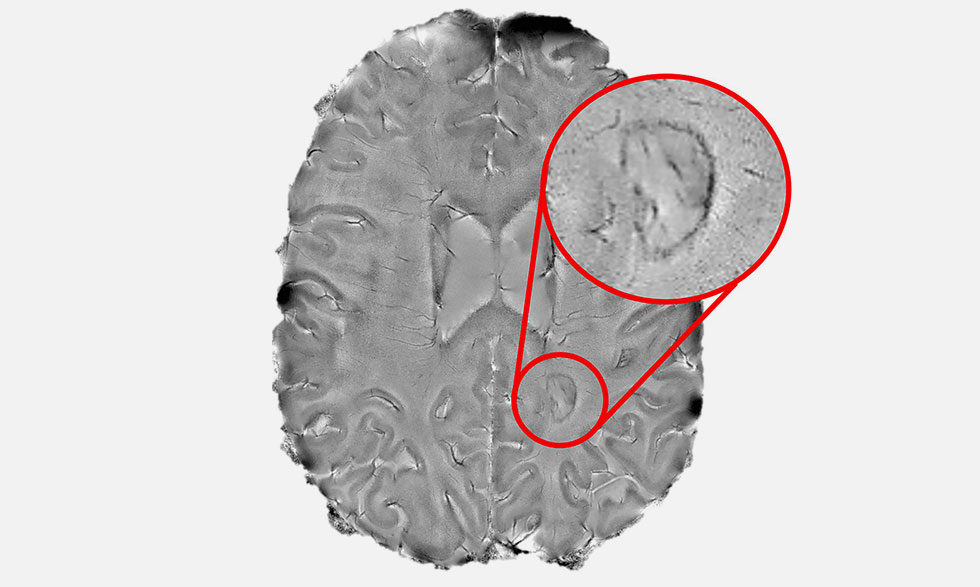 Dark-rimmed spots on the brain, like this one, may suggest a more severe form of multiple sclerosis and help with early detection.

Researchers may soon be able to look at images of our brains to help diagnose multiple sclerosis (MS) earlier.

MS affects more than 2 million people worldwide. The disease happens when the body's immune system attacks the protective coating around nerve cells in the brain and spinal cord.

In a recent study, National Institutes of Health (NIH) researchers followed 192 people with MS for seven years. They found that more than half of the patients had one or more dark-rimmed spots inside their brains. These spots may be markers for a more serious form of the disease.

Some early symptoms of MS include problems with seeing, balance, and muscle strength. But more aggressive forms have symptoms such as paralysis and serious problems with thinking and memory.

That's why researchers at NIH and researchers around the country are working hard to help detect the disease early.

The new study was conducted with patients at the NIH Clinical Center, the largest research hospital in the country. There, NIH researchers led by Daniel S. Reich, M.D., Ph.D., used a powerful magnetic resonance imaging (MRI) scanner to take pictures of the brains of the patients with MS.

His team then used a 3D printer to compare the dark-rimmed spots in the scans with similar spots seen in brain tissue samples. They found that patients with four or more of these spots were more likely to have the aggressive form of MS than those without them.

"Our results point the way toward using specialized brain scans to predict who is at risk of developing progressive MS," Dr. Reich says.

His team previously published instructions for clinics on reprogramming their lower-powered MRI scanners to better detect these spots. The team hopes that researchers around the world will use these instructions to develop better diagnostic and treatment strategies for people with MS.

Roughly 85% of people with multiple sclerosis have relapsing-remitting MS, meaning symptoms come and go over time.