A mother and daughter share their journeys and offer advice 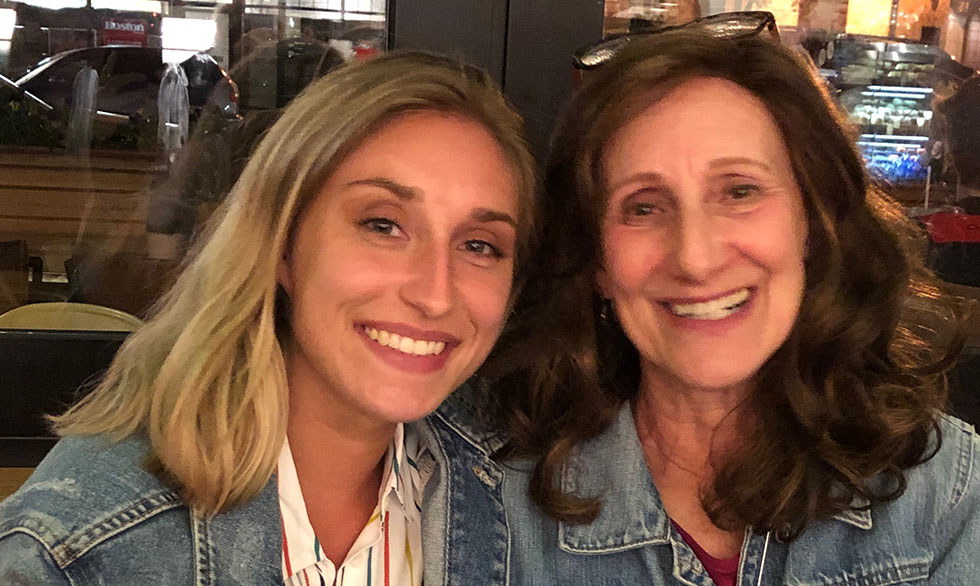 Suzanne Chutchian, right, and her daughter Rachel Chutchian-O'Sullivan have both suffered from endometriosis.

"How do you measure pain when no one talks about it?"

"If you have pain and other symptoms of endometriosis, don't downplay your symptoms."

That's what Suzanne Chutchian, a licensed clinical social worker and therapist, remembers about her endometriosis before she got treatment.

Endometriosis happens when tissue similar to the lining in a woman's uterus grows in other parts of the body. It can cause heavy bleeding and severe back and abdominal pain during a woman's menstrual cycle, or period. It can also cause intestinal problems and infertility.

Suzanne recalls trying to walk up the stairs at Boston University when she was 27 years old.

"I couldn't do it—the pain was horrible," she says. "My friend told me that menstrual cramps shouldn't prevent me from climbing stairs."

That's when Suzanne decided to discuss her symptoms with a gynecologist, a doctor who specializes in women's health.

Before getting help, Suzanne tried to manage her pain with over-the-counter pain relievers like aspirin and ibuprofen. She also used hot-water bottles to help ease her stomach cramps.

Her condition had a big impact on her daily life. In addition to painful menstrual cramps, she also had bad digestive pain and unpredictable bowel movements during her period.

Suzanne's mother also had endometriosis. But it wasn't something that was discussed much back then, so Suzanne, like many women, didn't know what to do about it.

"My mother thought it was somewhat normal to have pain, but she still encouraged me to seek treatment for it," she says.

When Suzanne finally discussed her pain and other challenges with her gynecologist, he gave her two options: laparoscopic surgery or pain killers.

She chose laparoscopic surgery, which confirmed that she indeed had endometriosis and treated it.

"After the surgery, I had no pain at all, and no stomach or bowel pain," she says. "I had freedom! I could do anything I wanted to do."

Because endometriosis can produce scar tissue in the pelvis, it can be difficult for women to become pregnant. So Suzanne's doctor prescribed medication to help Suzanne increase her chances of getting pregnant.

After several years of trying to get pregnant with no success, Suzanne looked into adoption.

A year later, soon after she adopted a baby boy, her son Eric, she learned she was pregnant.

Her pregnancy was not difficult, but she had frequent bleeding. Twelve weeks into her pregnancy, Suzanne learned that she had been carrying twins, but only one baby survived.

That baby, her daughter, Rachel, is now 25 years old. Rachel also has endometriosis.

Suzanne is glad that today there are more treatment options for Rachel and other women with endometriosis. Suzanne has had a number of laparoscopic surgeries since her first one. Doctors also removed the parts of her ovaries that were covered with excess tissue from endometriosis.

As a therapist and mom, Suzanne regularly gives advice to young women with the condition, urging them not to try to "tough it out" alone, but rather get treatment.

"If you have pain and other symptoms of endometriosis, don't downplay your symptoms or think you're not strong enough. Talk with a woman's health specialist," she says.

When she was just 10 years old, Rachel Chutchian-O'Sullivan got her first period.

"Take us seriously when we complain about horrible pain like this."

Each month, it lasted for 10 to 14 days, which is considered a long cycle. She also had severe menstrual cramps, pain in her lower spine, and stomach problems.

Rachel's pain was often so bad that she was late for school or missed it altogether.

"I remember walking to the restroom at school and stopping in my tracks," Rachel says. "I couldn't move at all."

Some days she couldn't focus because the pain was so severe. She was also embarrassed.

"It's not something you want to talk about when you're that young—or ever," Rachel says. Even with a doctor's note, Rachel remembers that her school administrators weren't very understanding about her tardiness or absences due to endometriosis.

In her early teens, Rachel had numerous doctors visits. Though she suspected it was endometriosis, a condition both her mother and grandmother had, providers wanted to rule out other issues.

They performed several tests, including computed tomography (CT) scans, ultrasounds, a colonoscopy, and an endoscopy.

Initially, Rachel's pediatrician prescribed birth control pills to help control her menstrual cycle and relieve some of the pain.

"It was still painful, but not as bad as it was before," she says.

The injection did have side effects, including weight gain. Rachel got the injections for several years, but eventually stopped because of a more serious side effect: decreased bone density. So, she went back to taking birth control pills.

"Ever since I was diagnosed, I've been afraid that I won't be able to get pregnant some day," she says. "Knowing that it's hereditary, I fear that if I do have children, I'll pass it on to them, too."

Today, Rachel still experiences cramps, but they're much less severe than when she was younger. At age 25, she's pursuing a master's degree in social work, as her mother did around that age.

She offers the same advice to all people, both women with the condition and the men and women supporting them: "Take us seriously when we complain about horrible pain like this."

She also advises women of all ages who have severe cramps or lower abdominal pain to talk with a women's health specialist as soon as symptoms appear.

"Make it known if you are having issues," Rachel says. "I didn't talk about it when I was younger, but now I do. There's more awareness now."