Comfort care for kids and their families: A mother’s story 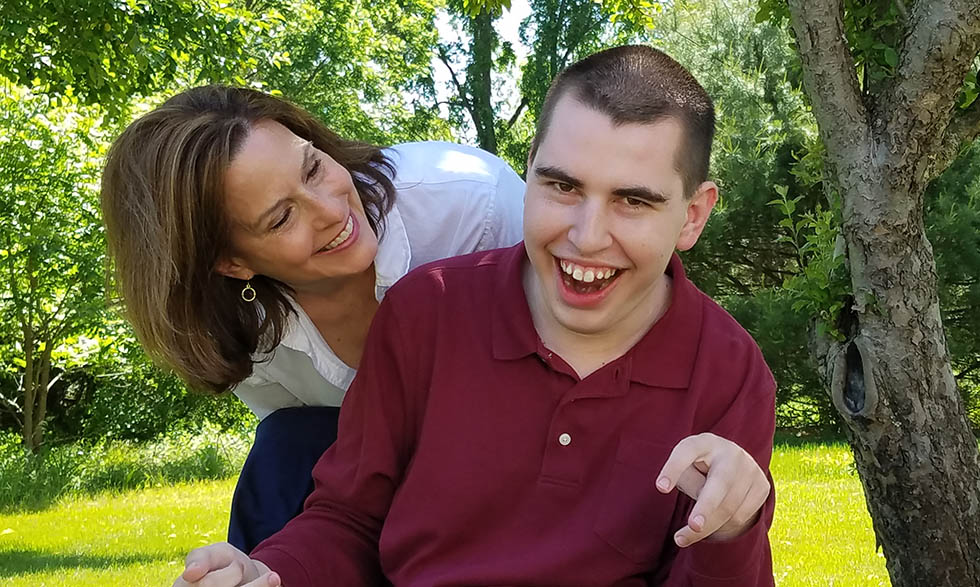 Barbara and Jake Swoyer near their home in Sudbury, Massachusetts.

When Jake Swoyer was born in 1995, he seemed like any other healthy baby boy. His family—parents, John and Barbara Swoyer, and big brother Ryan, then 3— were thrilled.

But when Jake, who is from Sudbury, Massachusetts, was 7 months old, he had his first seizure. After that, "he got very sick, very quickly," his mother says. His seizures came frequently and could last up to an hour. "We had 23 ambulance rides in that first year."

"I had no idea what palliative care really was or what it could do for us."

Despite a lot of testing, doctors were unable to determine a cause for his seizures until Jake was nearly 10 years old, when a test revealed he had a genetic mutation associated with Dravet syndrome. Dravet syndrome is a lifelong, rare form of epilepsy that begins in the first year of life and typically doesn't respond to medication. Jake was also later diagnosed with mitochondrial dysfunction, adding to the severity and complexity of his disease.

Since he was diagnosed, Jake has suffered a long, slow, steady decline in his health, his mother says. Palliative care has made all the difference in how the family has coped with Jake's devastating condition and in helping Jake enjoy a good quality of life. He received pediatric palliative care support and services until he turned 21.

"When Jake was first diagnosed, our physician suggested enrolling him in palliative care. Like many families, my first thought was, 'Oh no, he thinks my son is dying.' I had no idea what palliative care really was or what it could do for us," Barbara recalls.

She finally took his suggestion after about a year. As Barbara worked with several different providers, "a light bulb finally went off. I realized what palliative care was supposed to be," she says. "Along with providing clinical and emotional support, the palliative team introduced comfort care measures. Jake was able to receive pet therapy for enjoyment, massage therapy for relaxation, and music therapy for active engagement and socialization. Each of these therapies brought joy and positive change into his daily life."

Palliative care services also included a medical team to help with medical support and crisis management, Barbara says. "They could come to the house, diagnose a problem, and prescribe and provide treatment. We didn't have to go to the hospital for every problem." Having home-based medical support allowed the family to treat problems in their own home, which became especially important as Jake got older.

Embracing a difficult but important path

A chaplain and a social worker paid regular visits to the Swoyer home.

"In 25 years of caring for a child with limited life expectancy, these were two of the more meaningful and pivotal people I had the opportunity to work with," Barbara says. They were open to and encouraged philosophical discussion about Jake's eventual end of life.

"They helped us consider and define our goals of care," Barbara says. "From these conversations, we felt at peace with past decisions and better equipped to make future decisions on Jake's behalf. It was a relief to have these discussions in periods of calm, rather than in moments of crisis."

Barbara is a founding member of the Parent Advisory Board for Courageous Parents Network, a nonprofit organization that helps families and providers caring for children with serious illness. Her wish is for families to understand that palliative care is about helping a child live well in the face of life-threatening disease.

"It's about bringing happiness and comfort to a child, while also supporting the entire family unit, no matter where they are on their journey with serious illness," she says.

How pediatric palliative care can benefit your family

Barbara Swoyer tells parents that pediatric palliative care can help them with these issues:

Did you know? Pediatric palliative care can include support for siblings.

What is palliative care?

Palliative care offers care and support from a team of health providers such as doctors, nurses, and social workers. Palliative...

Palliative care: A spectrum of support

When we think of caregiving, we often think of helping elderly family members or friends. But many people—old, young, and...

Pediatric palliative care resources for you

Dealing with a serious illness can be overwhelming, especially when it involves a child. NIH is here to help. The...