After her cancer diagnosis at 26, Lily Taylor finds strength through advocacy 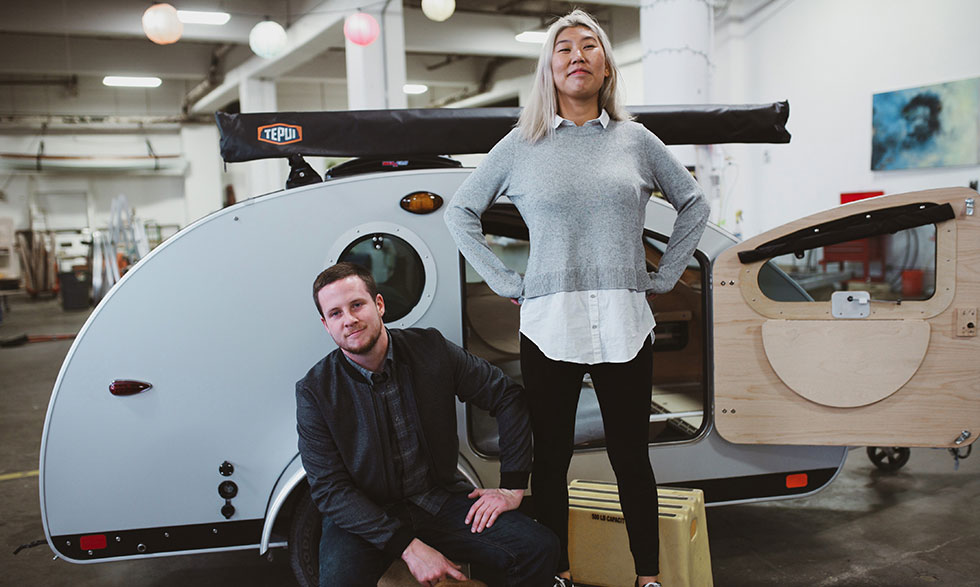 Lily Taylor and her boyfriend, Kevin, at her family's RV plant. Kevin supported Lily through her difficult cervical cancer treatment and recovery.

Think of someone you know who loves to laugh and can make everyone around them laugh. Now, imagine that person is unable to laugh like they used to.

That's what it was like for Lily Taylor, now 32, who was diagnosed with cervical cancer six years ago.

"I was heartbroken. I couldn't laugh or make others laugh anymore," she says.

When Lily was 25, she began having pain in her pelvis, abdomen, and legs. At first, she thought it was from being on her feet at her job as a restaurant server.

She also had frequent minor kidney infections and bleeding during sex. Lily didn't think much about those problems until the pain and bleeding got worse.

Lily went to her doctor, who did a Pap smear to check for abnormal cells in her cervix. The doctor quickly called in a gynecology specialist, a doctor who focuses on women's reproductive health, to examine Lily.

Then Lily had to go to another specialist to have a biopsy, or sample, of her cervical tissue examined. "It was a very painful procedure," she says. "I cried. The nurse had to hold my hand the entire time."

The biopsy was an important step in getting her diagnosis. After a weekend of worrying and crying while she waited for the biopsy test results, Lily's doctor called and told her that she had cervical cancer.

"I was in a complete fog—just in shock—when I found out," Lily recalls.

"Don't be ashamed to get the vaccine or to have your children vaccinated. HPV and cervical cancer can be prevented."

During treatment, she had to stay in bed because she was constantly nauseous or vomiting. She eventually lost her hair and had to leave her job because of the side effects.

Before Lily began treatment, her doctors asked if she wanted to freeze her eggs, in case she wanted to give birth some day. They told her that chemotherapy would make her infertile.

"I was 27 years old and didn't take the time to think about it," she recalls. "I was unsure at the time and just wanted to quickly get on with the treatment plan."

Having cervical cancer was difficult in several ways for Lily. In addition to the pain and treatment, Lily also had to deal with losing her hair, not being able to give birth to children someday, and judgmental comments from people who didn't know much about the HPV vaccine or cervical cancer.

Treatment was difficult but successful, and Lily and her family were thrilled to hear that the cancer was finally gone. Five years later, she is cancer free and happy to have her strength, and sense of humor, back.

Lily says that she wishes she had listened to doctors—and her body—years earlier. She had a Pap smear when she was 21, but she never replied to a follow-up call from her doctor about an abnormal result.

"Today, I would call the doctor back. I'd be my own advocate," she says. She wants other women to be their own health advocates and to listen to their bodies.

Overall, Lily says that her cancer experience has made her a stronger person.

She's an active member of cervivor.org, an advocacy resource and community of people who have, have had, or know someone with cervical cancer. She also spreads awareness of the HPV vaccine and cervical cancer and has her own support group in Minnesota called At Your Cervix MN.

Lily encourages everyone between ages 11 and 26 to get the vaccine.

"Don't be ashamed to get the vaccine or to have your children vaccinated," she advises. "HPV and cervical cancer can be prevented."

Most importantly, Lily wants people, especially women, to feel comfortable talking about their sexual and reproductive health to help prevent what she and many others have gone through.

"Don't be afraid or embarrassed to talk about your private parts—with partners, parents, or health care providers," Lily says. "We're all the same."

As many as 93% of cervical cancers could be prevented by screening and HPV vaccination.

Important research by investigators at the National Institutes of Health (NIH) and beyond has shown that the human papillomavirus (HPV)...

HPV and cervical cancer: What you need to know

Human papillomavirus (HPV) is the most common sexually transmitted infection in the U.S., and there are more than 200 strains...