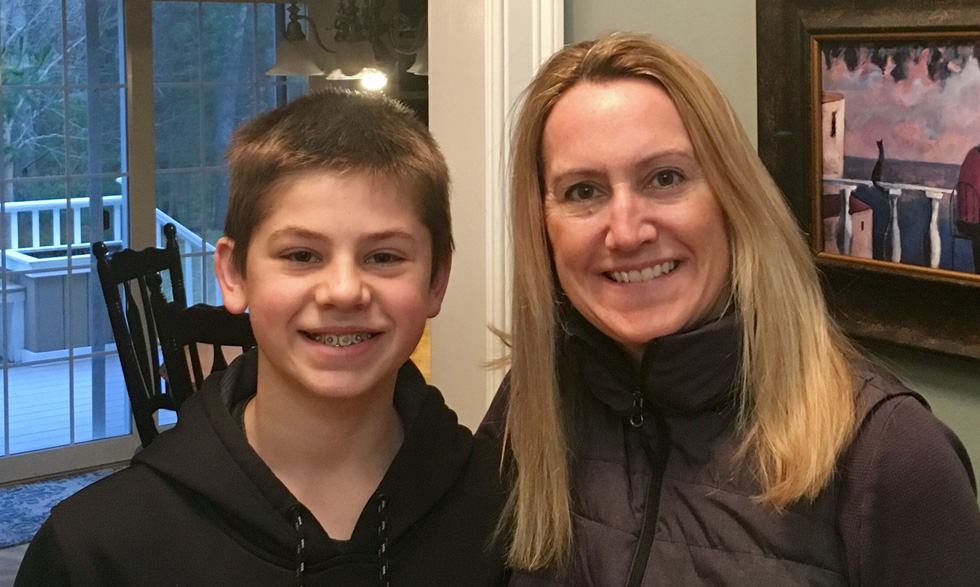 Michelle Marchionni pictured at home with her son Sam in April, 2017.

"It would have been easier if he had broken a limb," Michelle Marchionni says about her son Sam's first concussion.

In the fall of 2012, 8-year-old Sam fell backward and hit his head on the grass when he was playing touch football.

The school nurse called Marchionni and said it was nothing to worry about. "When Sam came home, he seemed fine. I didn't think it was anything serious. A day later, he complained of a mild headache, but nothing more," Marchionni says. "We didn't take any special precautions."

"If we had let Sam rest after his first concussion, that second hit wouldn't have happened."

On the following Sunday, while playing in the yard at home, Sam hit his head again. The injury seemed minor, but it turned out to have a major impact. "Kids get bumps and bruises all the time. We had no idea the first injury was a concussion," Marchionni says.

Presumably, because his brain didn't have enough time to heal after the first injury, the second hit caused more problems for Sam. His mother noticed it right away. "He'd get a headache after any kind of mental activity, even just watching TV," she says.

It got so bad, he needed to stay home from school. From the time of his injury in November until early January, Marchionni had her son limit his activities. "No sports, no screen time, no reading. He couldn't even have friends over, because we were afraid of the physical activity," she says. "It was really tough on him." Fortunately, by mid-January, Sam was back to his old self.

One year later, Sam fell again during a touch football game at recess.

"We pulled him out of sports for three weeks. We made sure he took it easy," says Marchionni. "Recovery was faster, and Sam didn't miss any school." Three years later, when Sam was 12, he got a concussion during a school hockey game. "Sam immediately benched himself. He didn't forget what happened to him when he was younger," says Marchionni.

Once again, Marchionni consulted with a pediatric concussion specialist. But this time was different.

The specialist told them about new research on treating concussions. "He said mild physical activity was actually good for recovery. We took his advice, going on walks together, getting fresh air. I think it helped Sam get better faster," Marchionni noted.

"The most important thing to remember is to pay attention," Marchionni says. "If we had let Sam rest after his first concussion, that second hit and its repercussions wouldn't have happened."

She knows Sam was lucky. "Some kids that get concussions are never the same. "But it wasn't luck that kept Sam healthy after his subsequent concussions. "Taking steps right away made all the difference." Today Sam is an active and happy seventh grader. Marchionni says, "He's the happiest kid I know."